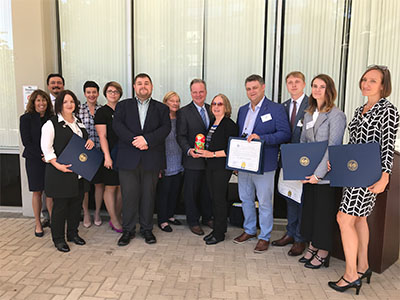 The Moscow Sister County Commission received a grant to host its 5th Open World delegation from Moscow, Russia, Sept. 17 - 21, 2018. The delegates consisted of five attorneys from non-profit organizations and one facilitator, with the goal to learn about the United States Public Defender’s system and its role at the Federal, State, and County levels. The Commission collaborated with the County of Santa Clara Public Defender’s Office to facilitate a week-long professional program for the delegation.

The delegates visited and observed real court proceedings and observed attorneys, paralegals and clerical staff from the Public Defender’s Office in their roles of preparing to represent defendants. The delegates also visited law clinics from Stanford University and Santa Clara University to learn about the legal education system and were intrigued and inspired by various projects the schools initiated, such as the International Human Rights Clinic at Santa Clara University.

Delegates also had the opportunity to conduct presentations to their counterparts at the County Public Defender’s Office and Stanford University to share the legal system in Russia and discuss and exchange information on various real cases in their own practices.

Additional highlights of the delegation visit include:

Past Delegations and Exchanges