The County of Santa Clara/Moscow Sister County Commission is committed to fostering relationships with its sister city Moscow, especially in the areas of child welfare and accountable governance.

During an official delegation to Moscow, commissioners learned about the Open World Program. The Open World Leadership Center was formed by the U.S. Congress in 1999 to establish a better understanding between the U.S. and other nations by creating opportunities for developing leaders to observe and experience American politics, business, human services, community development, and community life.

In 2008, working through the grant administrator World Services of La Crosse, the Commission applied for an Open World grant opportunity to host a child protection themed delegation. At the same time, Moscow Commissioner Sergey Savastiouk reached out to colleague Ms. Irina Ryazanova of Big ​Change Charitable Foundation​ (Bolshaya Peremena) in Moscow to facilitate the nomination of delegates. Big Change was formed in 2002 to help orphanage graduates in Moscow to acquire independent living skills, education and jobs to live productive lives. 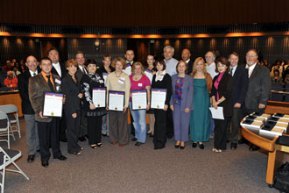 Under the guidance of Commissioner Nancy Madison to facilitate the grant application process, and Commissioner Savastiouk to facilitate the communication with Moscow partner Big Change in the selection of nominees for the delegation, the Commission was awarded a $7,125 grant to host its first Open World Delegation in October 2009.

The commission, with the support of the Office of Public Affairs, began planning for the delegation.

Commissioners Nancy Madison and Anne Garvey facilitated the program development, working with the Santa Clara County Social Services Agency and local community based organizations to develop a social services program that would support an exchange of best practices in child welfare and foster care services. Commissioner Frank Verlot secured home hosts, families who would host the delegates for the nine day visit, giving the delegates a close up of American life.

The commission welcomed the delegation, including 2009 Open World delegate Ms. Olga Klimkina, Oct. 2-10, 2009. At the same time, the commission invited and hosted Ms. Ryazanova and Ms. Goulnara Panina of Big Change, with the intent of exploring opportunities for future collaboration among the commissioners, delegates and Big Change.

Following the success of the 2009 Open World Delegation, the commission applied for another grant through grantee organization World Services of La Crosse and received its second Open World grant in 2011 for an accountable governance delegation. The accountable governance delegation included two city councillors, a journalist, and a federal official from Moscow Region. 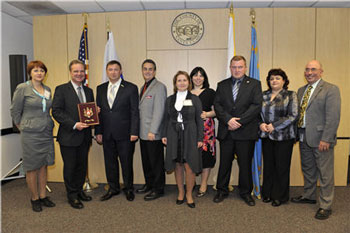 Transparency was also a major theme of Q&A on government- media relations with County Public Affairs Director Gwendolyn Mitchell, and of a session at the Registrar of Voters Office. A delegate involved in land registration had a separate meeting at the County Clerk-Recorder’s Office; she was particularly interested in the computer area where citizens can research property records.

The commission continued to work with Ms. Olga Klimkina and Big Change over the next three years, leading to the development of both the independent living program in Moscow and the Building Bridges Initiative.

In November 2012, the commission was awarded another Open World grant to host a delegation in September 2013 around the theme of services for youth. 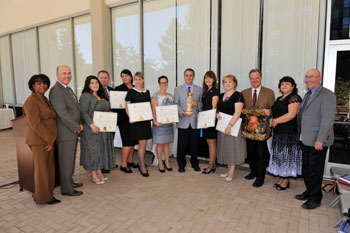 The Juvenile Justice 2013 Open World delegation, Sept. 13-21, was an outgrowth of an ongoing child protection collaboration between the social services departments of Moscow and the County of Santa Clara. This collaboration started as the result of the success of a child protection Open World delegation that visited Santa Clara County in 2009. The grant-funded 2013 Juvenile Justice delegation has strengthened that collaboration and extended it to include the juvenile justice departments in both jurisdictions.

The Moscow Commission partnered with the Santa Clara County Probation Department to create a program that gave a comprehensive look at the Santa Clara County Juvenile Justice System. The program included site visits to the Juvenile Court, William F. James Ranch, and Bill Wilson Center. The delegation met with both government and community based organizations to exchange information about the Russian and U.S. Juvenile Just Systems, and to learn about the rehabilitation services provided to youth and their families.